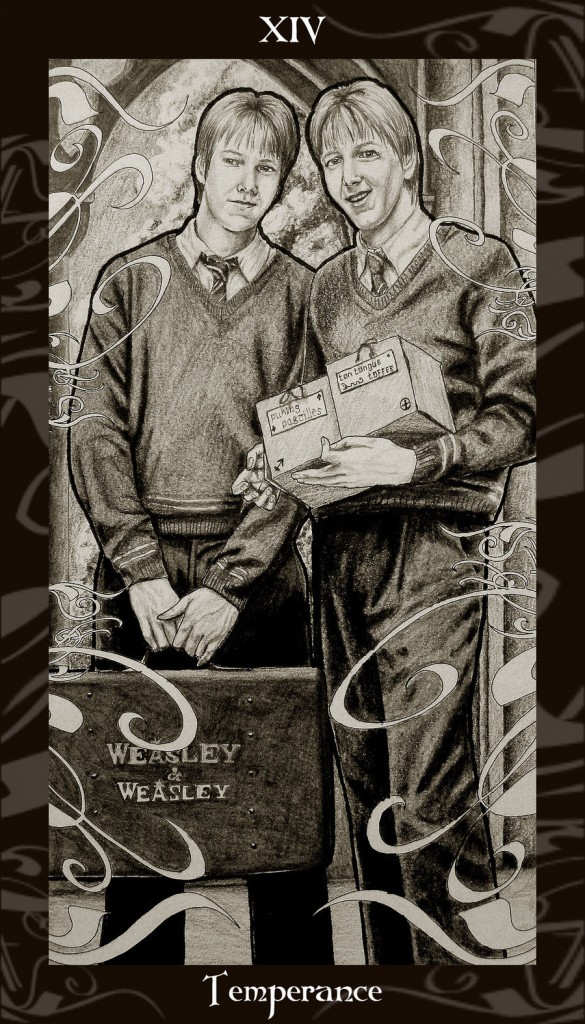 Alchemy, the golden mean, proportion and harmony, the leveling-out of imbalance, the opposite in everything, transformation from the flawed to the perfect, artistic imagination

Temperance is an undervalued virtue these days, though we could all do with a dose of it when we live in a world where people thrive on excess: excess consumption, excess expectations, excess conviction (whether religious, political or otherwise), excess pride and sense of entitlement. All of our excess is currently boiling this planet alive – in conflicts, climatic change and overcrowding. Temperance tries to scale back, to even things out, to redress imbalance, and that is exactly the meaning and measure of this card. When drawn you are called to assess the imbalances and excesses in your life and restore equilibrium. Can you do with less of something: less anger, less impatience, less spending, less speed, less greed?

The Weasley twins seem like an odd choice for this card, as apparently they thrive on excess, but this is misleading as actually time and again they interfere to even the score.

Angry Harry on another rant? They tell him not to bottle up his emotions, to let it all out, and their sarcasm shames him and calms him down. Umbridge at the height and might of her power at Hogwarts? They create a swamp, cause total mayhem and set Peeves on her. Harry confined to the castle, because of Uncle Vernon’s spiteful refusal to sign the permission slip to go to Hogsmeade? They give him the Marauder’s Map. Molly in full smothering information lockdown for Harry’s safety? Extendable ears! Everyone hiding under the bed because of “You Know Who”? They invent U-No-Poo – to show people what’s really important in life – a good digestion!

In the end their whole sweets business was founded on the idea that you can create an imbalance, and then even it out again – every puking pastille and ton- tongue-toffee has its antidote.